Dr Dimitrios Pappas is a rheumatologist practicing in Athens Greece. He has an expertise in the diagnosis and management of arthritis.

He completed his internal medicine residency training in Albany Med in Albany NY. During the third year of his residency he was assigned the role of the chief resident and received the Albany Med Research award. He also won first place in the American College of Physician NY poster competition.

His rheumatology fellowship training took place at Johns Hopkins Hospital in Baltimore, MD. During his training he was awarded by the Arthritis Foundation.

Subsequently, he joined faculty at Johns Hopkins, initially as an Instructor and then as an Asst Professor of Medicine. He founded and co-directed an ultrasound arthritis center – one of the first in the USA to incorporate musculoskeletal ultrasound in the diagnosis of arthritis. He has since participated in international meeting round tables, has authored a book chapter and has trained younger rheumatologist in the use of musculoskeletal ultrasound.

In 2010 he moved to New York city to join faculty as an Asst Professor of Medicine at Columbia University. He directed the FAST (Fast Arthritis Sonographic evaluation and Therapy) center. The incorporation of ultrasound in the management of arthritis was featured in nationwide TV and radio networks.

In late 2013 he moved to Athens Greece and joined Athens Medical Center. As the director of the rheumatology division he evaluates patients while he maintains the role of Asst Professor of Medicine at Columbia University which he visits frequently to evaluate admitted patients and also teach. His teaching responsibility includes ultrasound teaching to rheumatology fellows and pathophysiology to medical students.

In parallel he is the scientific director of the Consortium of Rheumatology Researchers of North America. Since 2019 he is a member of the board of directors of its nonprofit branch (research foundation).

He is an author of a multitude of research articles in the most premiere medical journals and has authored book chapters on arthritis and musculoskeletal ultrasound.

At his private practice in Athens he is focusing on the management of patients with inflammatory arthritis (e.g. rheumatoid arthritis, psoriatic arthritis, ankylosing spondylitis, enteropathic arthritis, gout, reactive arthritis, seronegative and others)

According to expertscape he is ranked at the top 1% of experts in arthritis. 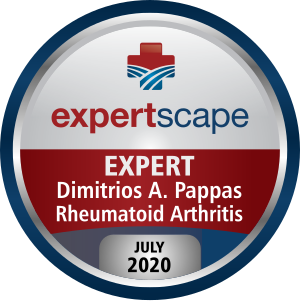